A space to promote creativity and collaborative learning.

deardesign studio has conceptualized the interior design of the atrium of the Madrid Content City university campus, an exemplary training space that, with an area of 145,000 square meters, will become the second largest audiovisual production center in Europe.The campus brings together, under the same concept, all levels of higher education through the iFP professional training center and the new university school of entertainment sciences, THE CORE, who led this project. 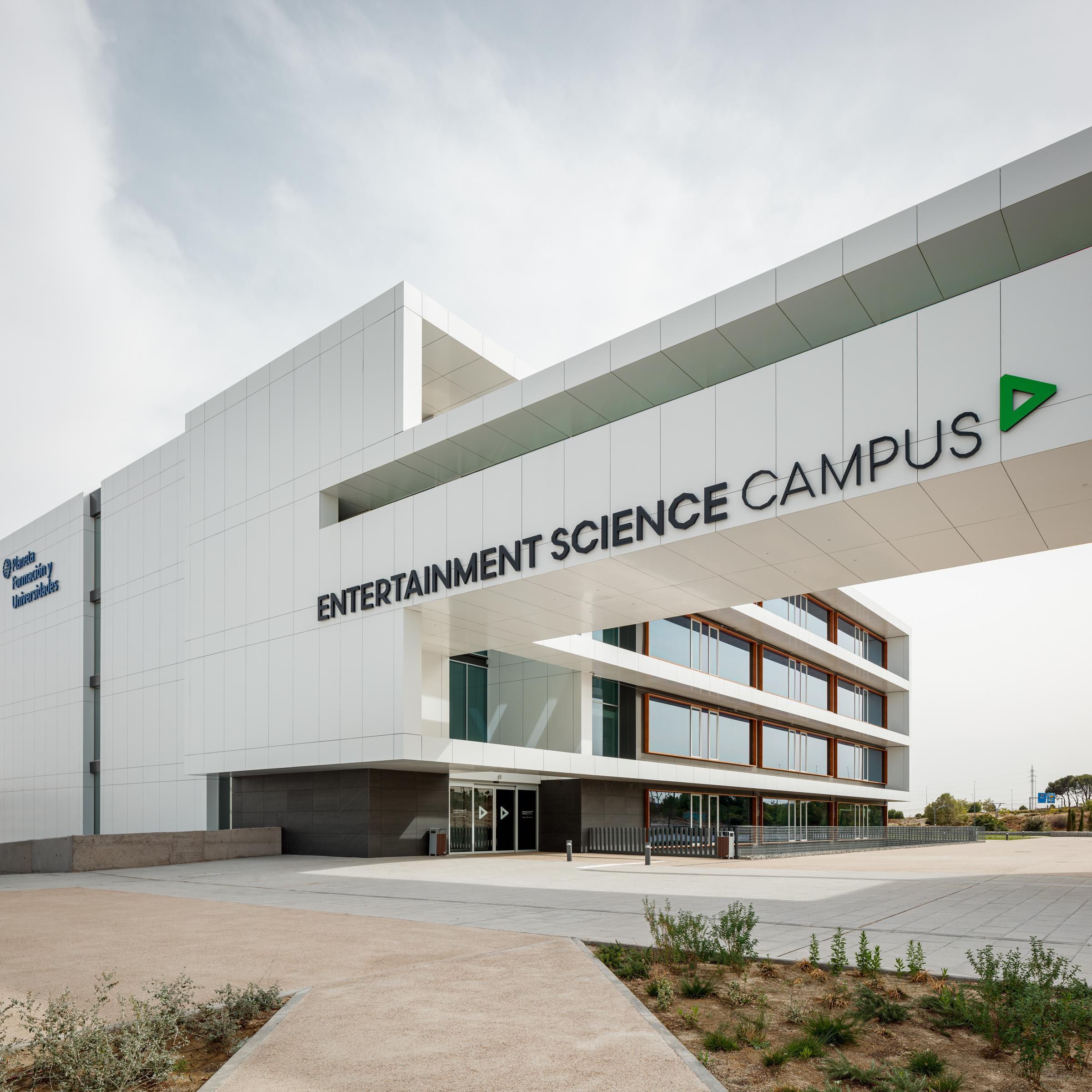 The atrium is located in the  Entertainment Science Campus, which is, in essence, the nerve center and connection hub of the university, and its’ most iconic place. The challenge was to conceptualize a spatial identity that would convey the spirit and personality of the first audiovisual entertainment sciences campus in which all users would feel identified. In addition, it was necessary to create a space with enough versatility to be used in a timeless way and equipped with the latest technologies. 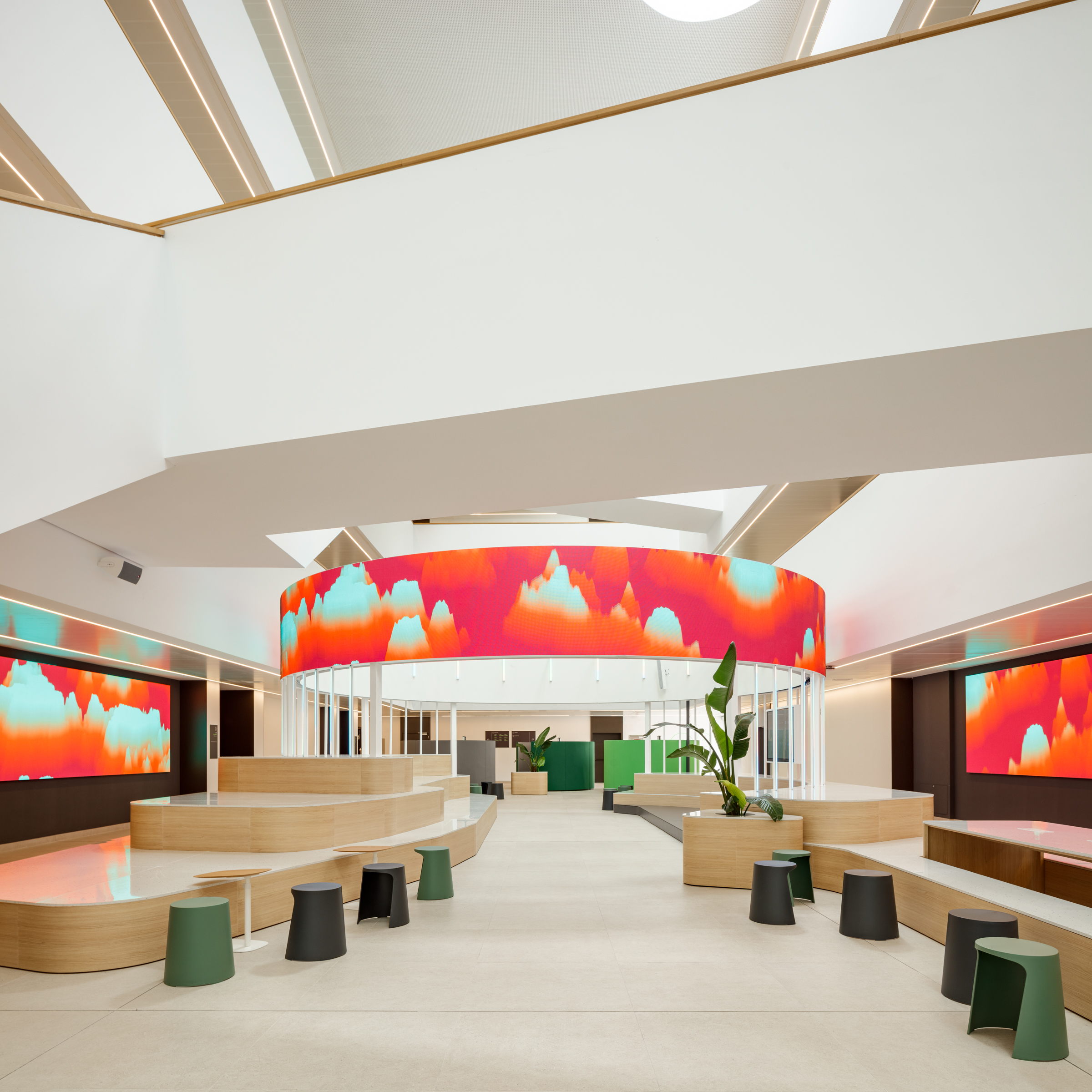 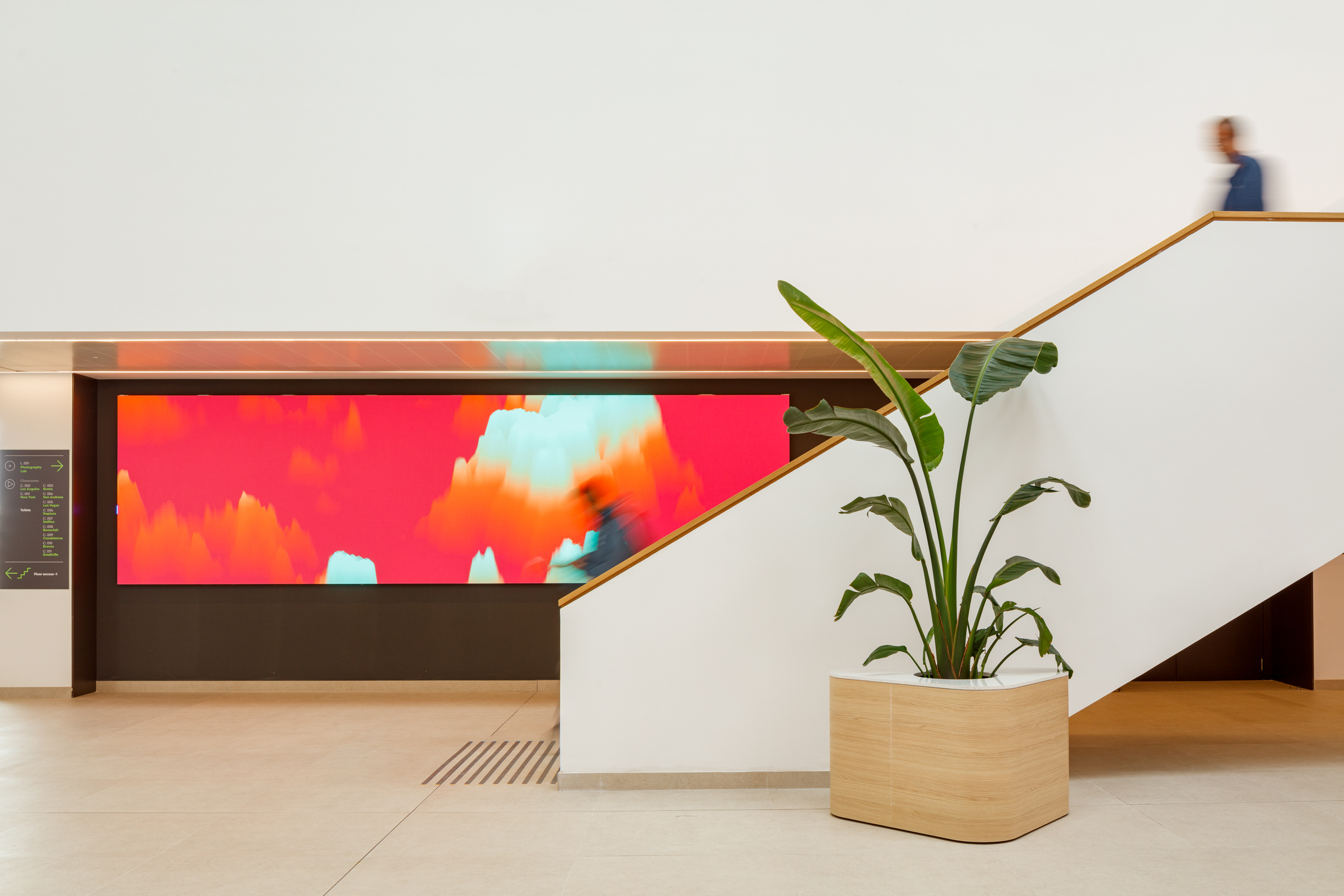 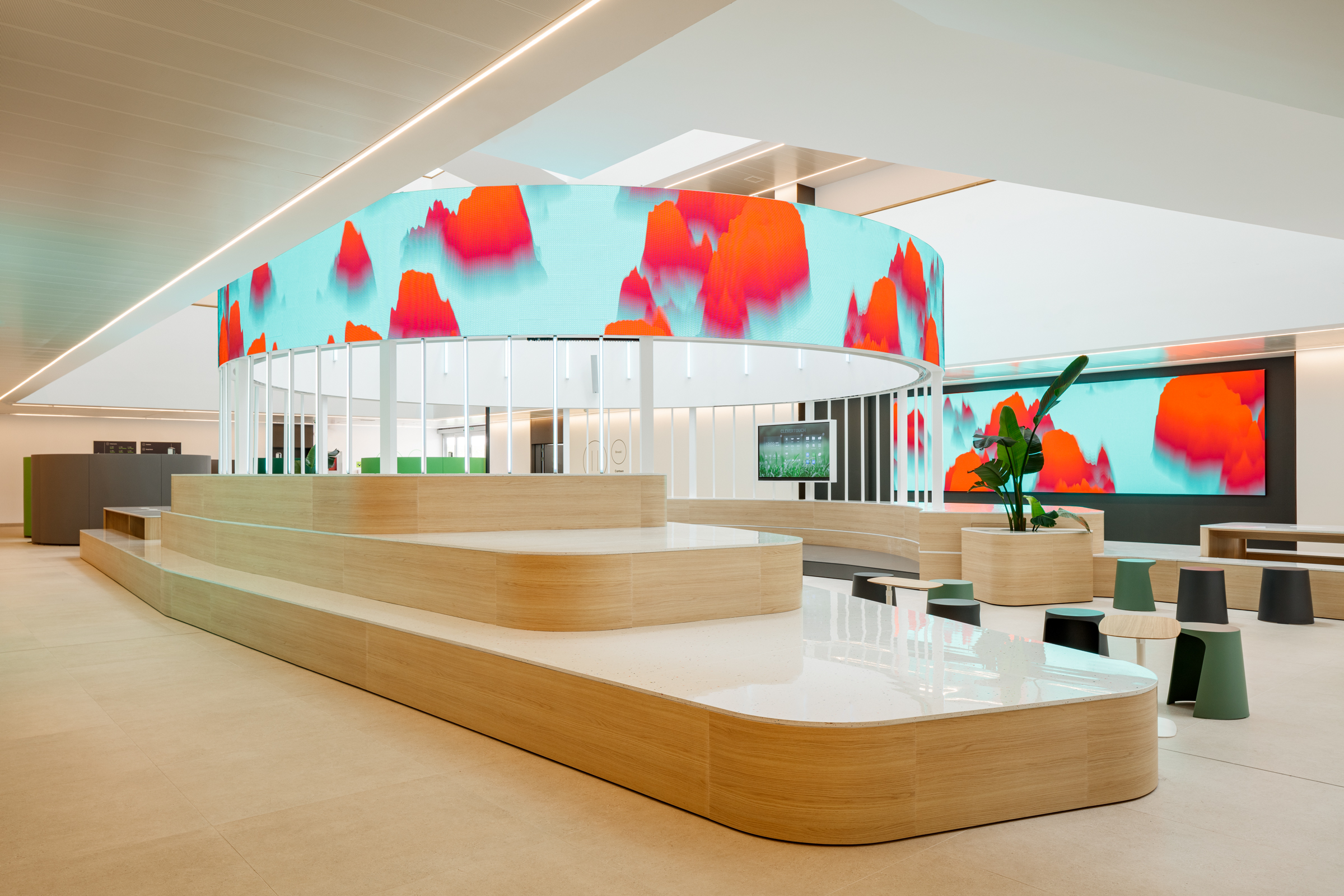 For all these purposes, deardesign has created a versatile and modern-looking space that facilitates interaction between students and professionals who work at the university.

The idea was to design an emblem, inspiring and multifunctional space for learning. And as the result an arena featuring  an open stage for presentations, conferences or informal meetings and a multilevel seating area allowing different seating formats were created. 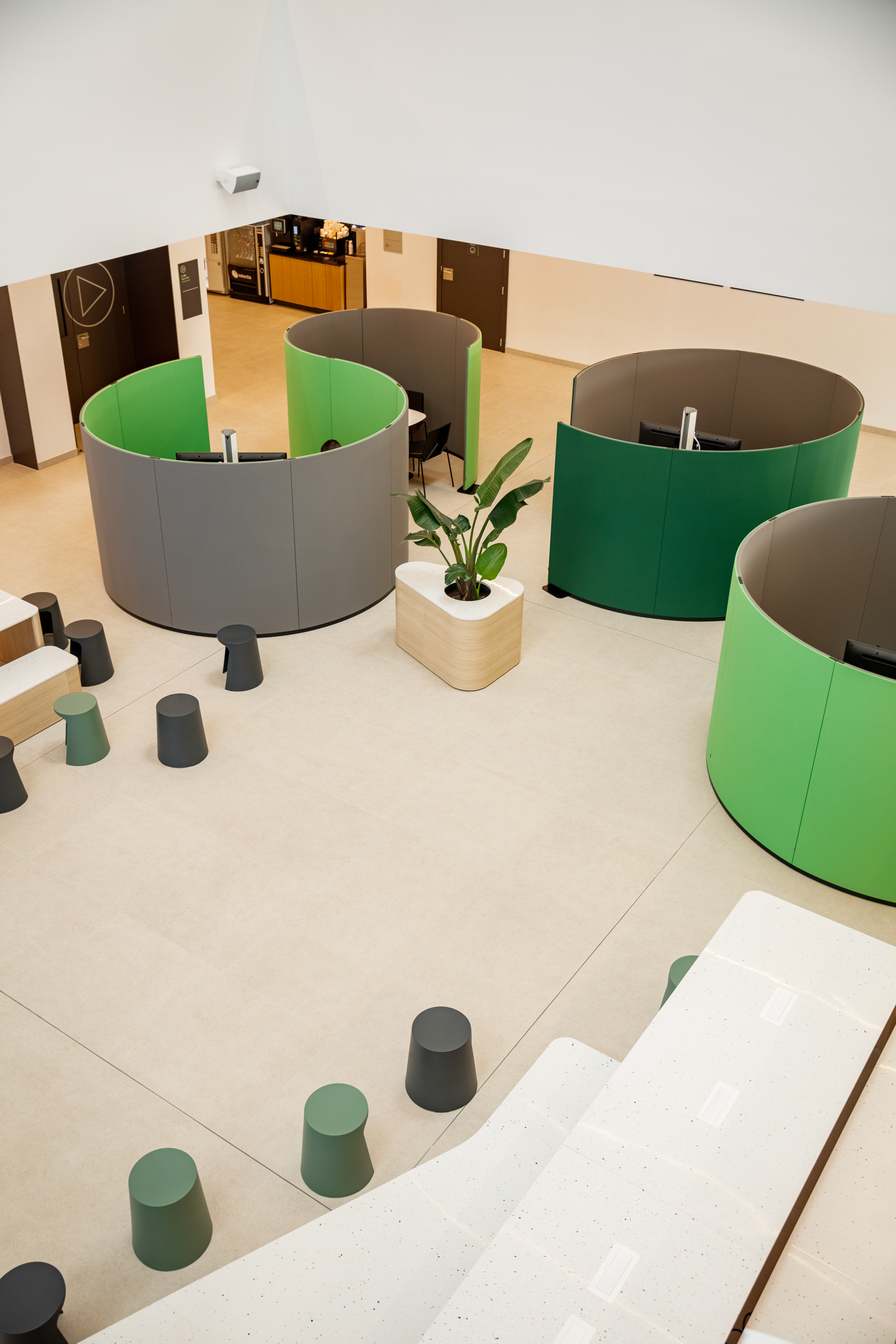 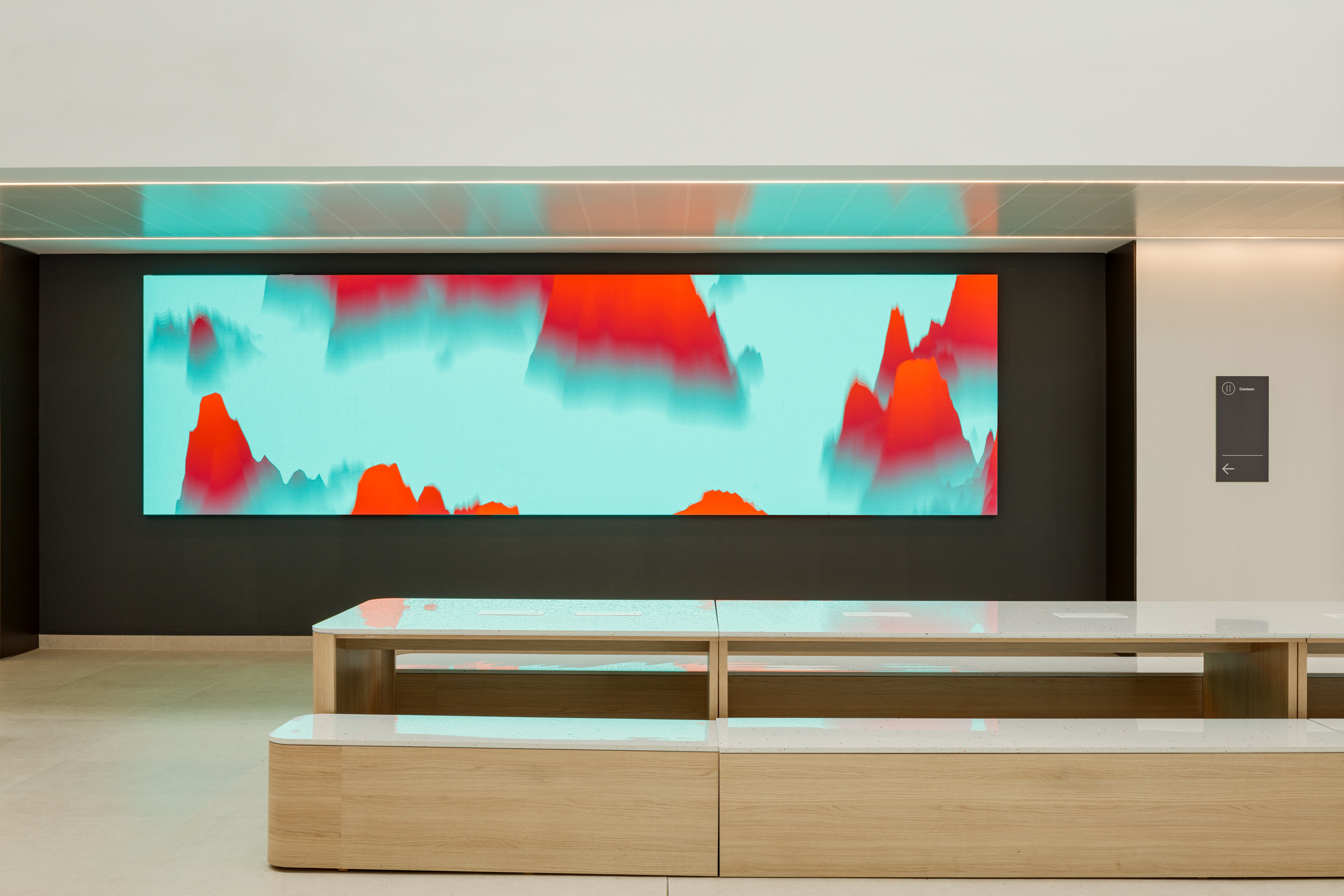 Around the arena the collaborative spaces such as co-working areas with work tables and meeting rooms equipped with screens fitting 2 to 5 people and providing visual and acoustic privacy have been implemented. Workspaces have also been placed on the rest of the space, next to the coffee break point.

All of these areas offer flexibility to maximize user comfort and optimize teamwork performance. 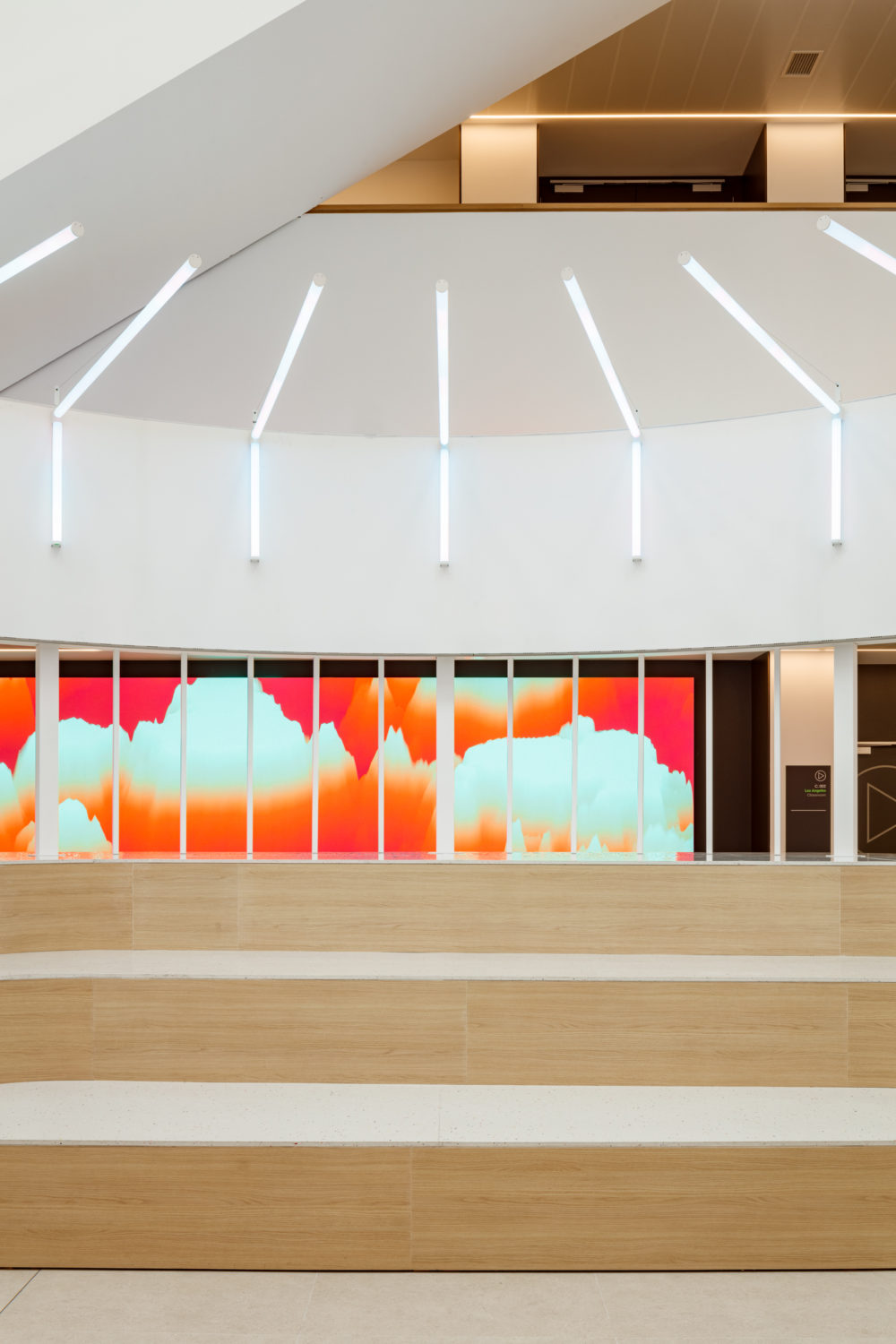 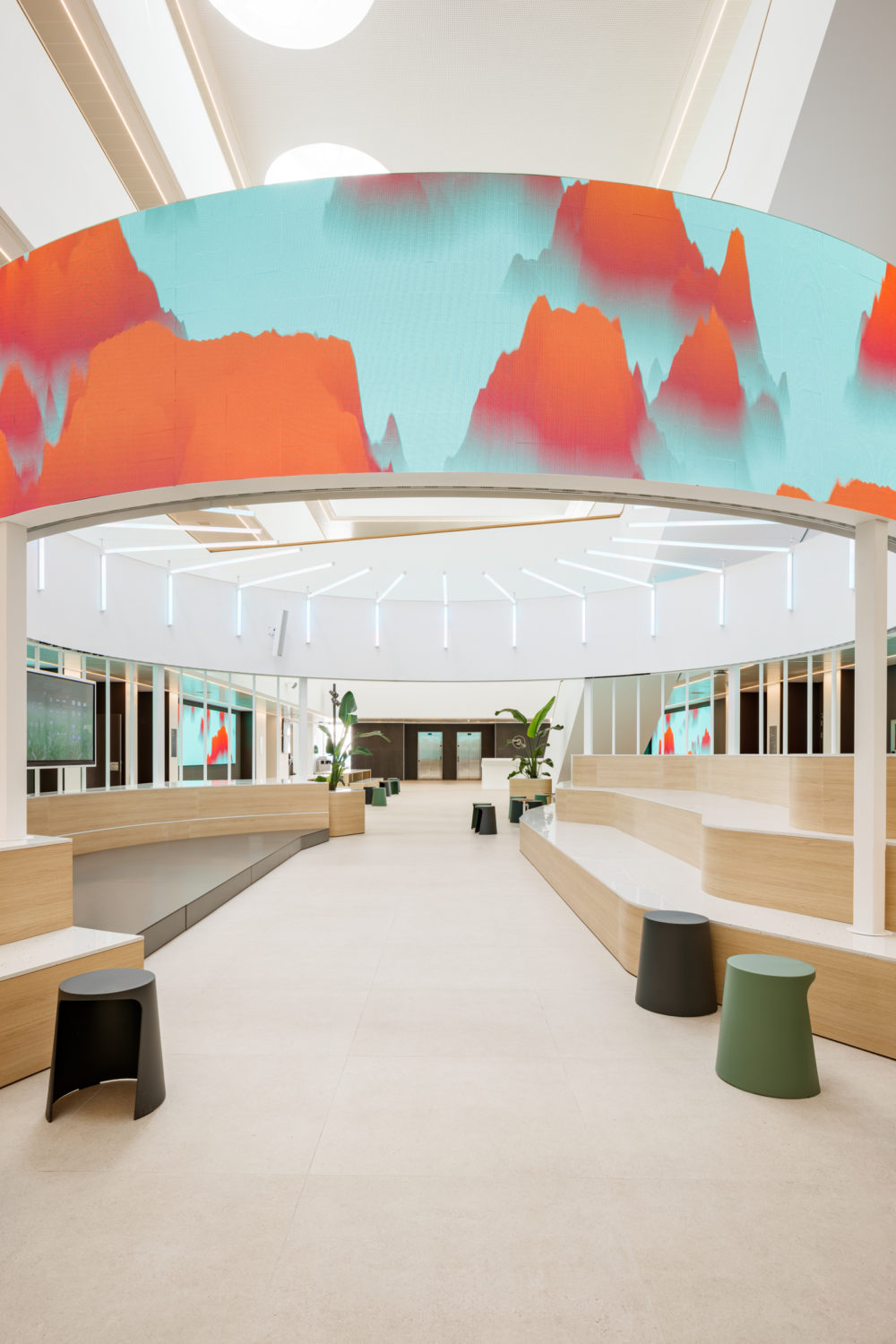 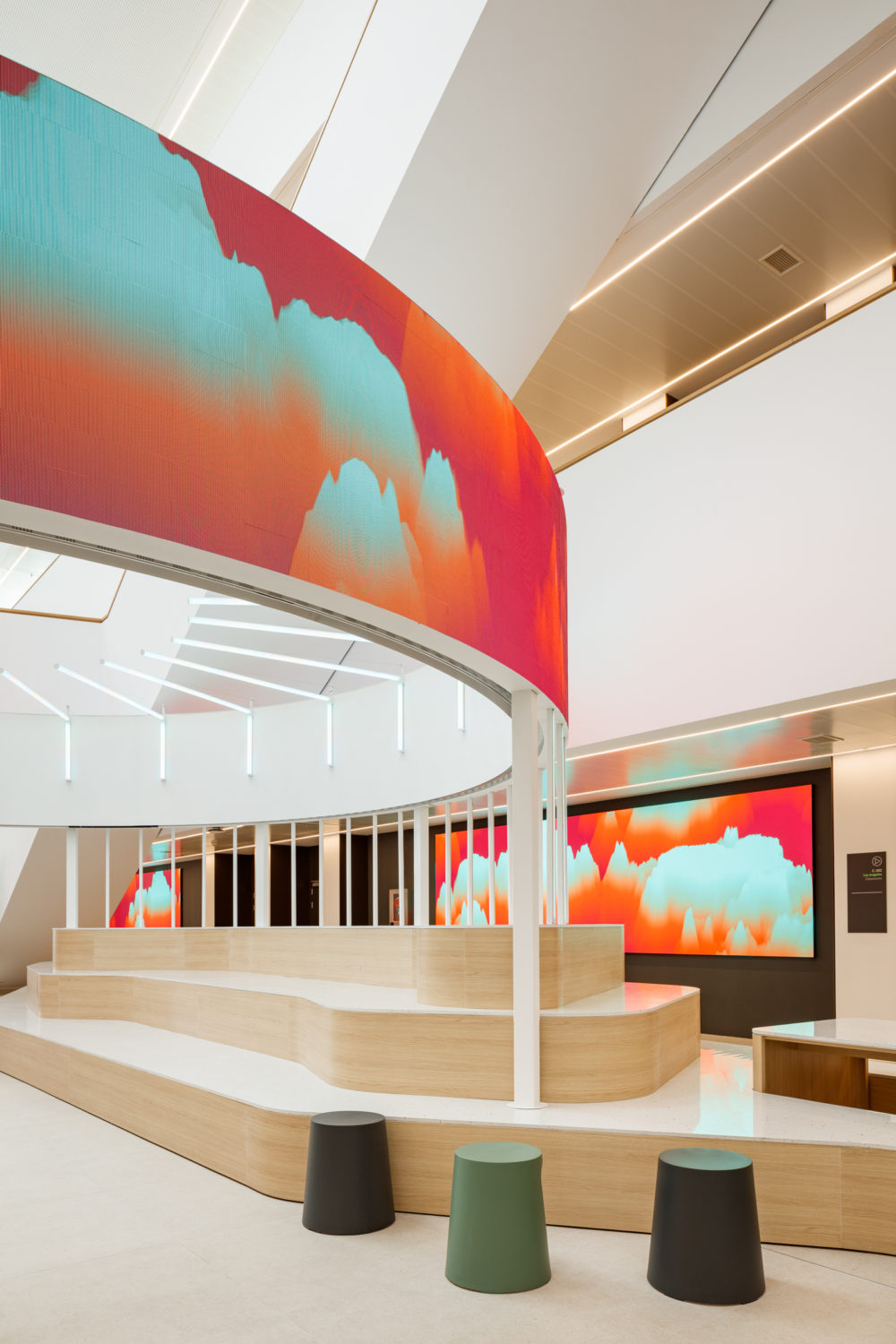 The peculiarity of the atrium is the interactive audiovisual and lighting equipment that has been designed in coordination with Instronic and Protopixel teams. A large central circular screen, with a length of 27 linear meters, becomes the visual epicenter of the room, being the main element in the space that energizes it and facilitates the presentation of all the projects developed on campus. 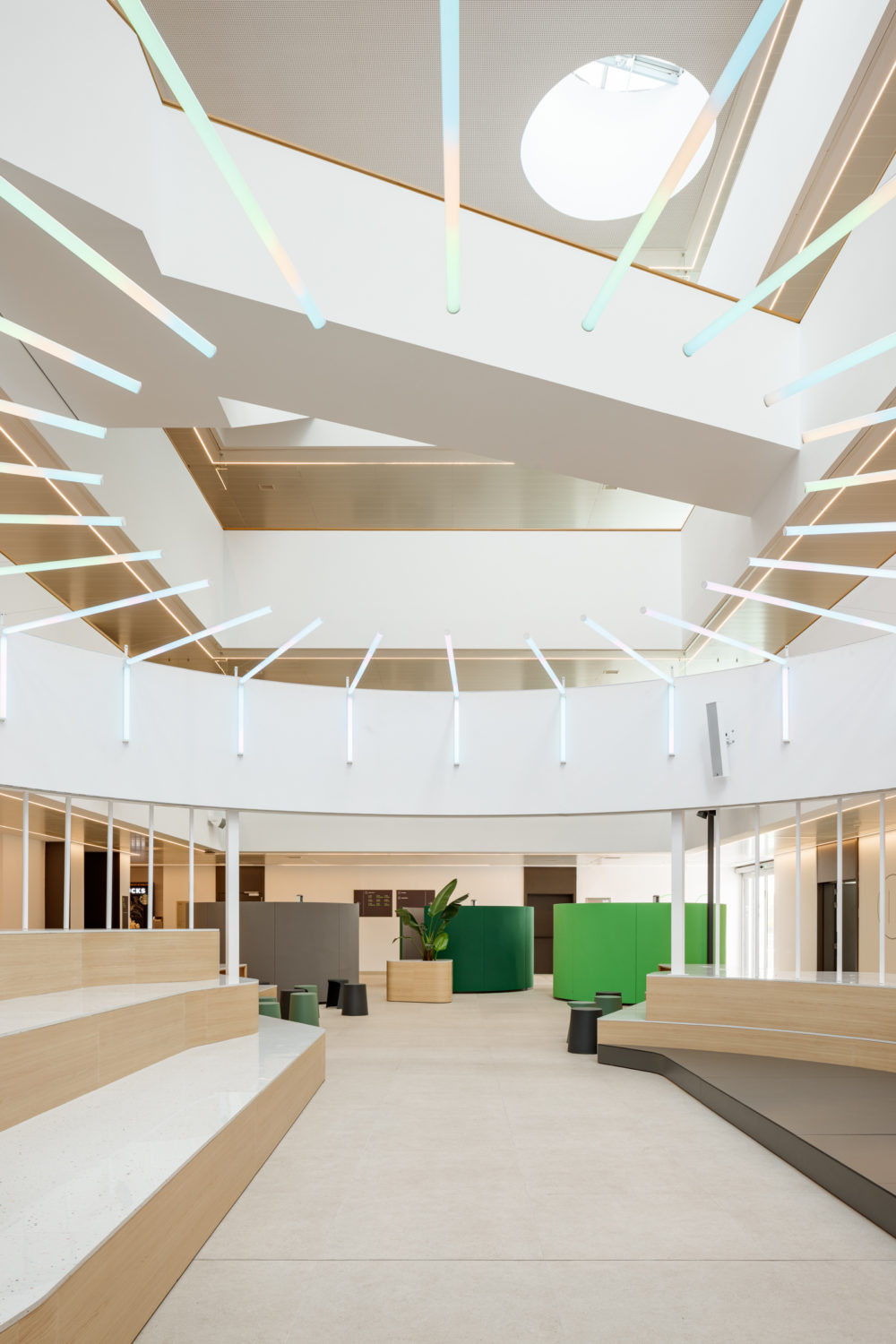 Dynamic lighting reacts in real time based on the content on the screens. Depending on the type of activity, different lighting patterns are activated. In addition, other LED screens and a surround speaker system have been installed around the perimeter to enhance the impact of the projected content and allow viewing from anywhere in the atrium. Both the screens and the audio can be programmed according to the needs of the event or the type of training.

Following the studio’s own ecodesign methodology, all the custom-designed furniture in the common area was built from recycled materials. As for the standard furniture it has been chosen based on the ecodesign criteria or cradle to cradle certification, a concept that literally means “from cradle to cradle” and defines manufacturing processes aimed at recycling, starting with the design itself. So that a product life end does not generate waste, but becomes a new beginning of subsequent production. 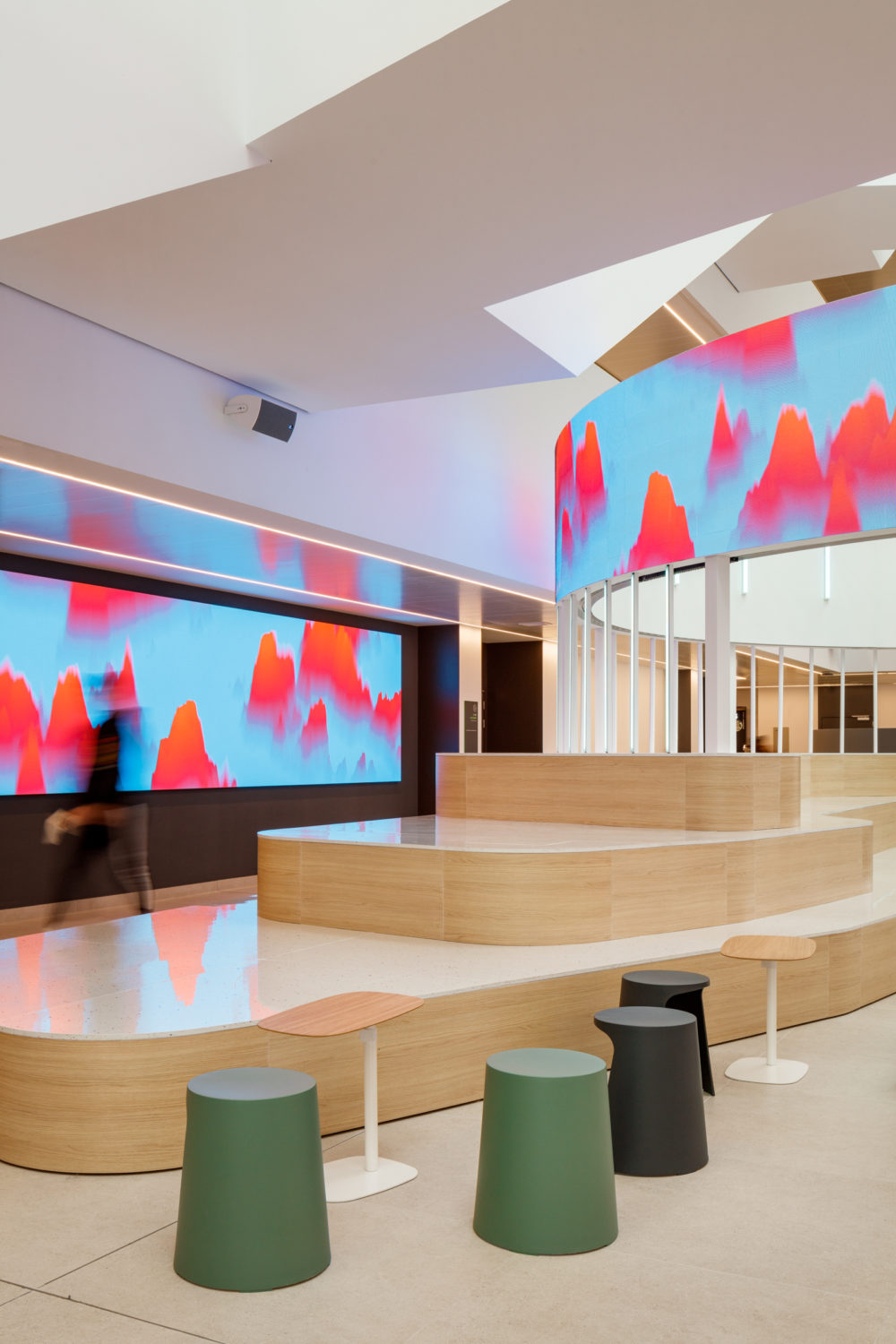 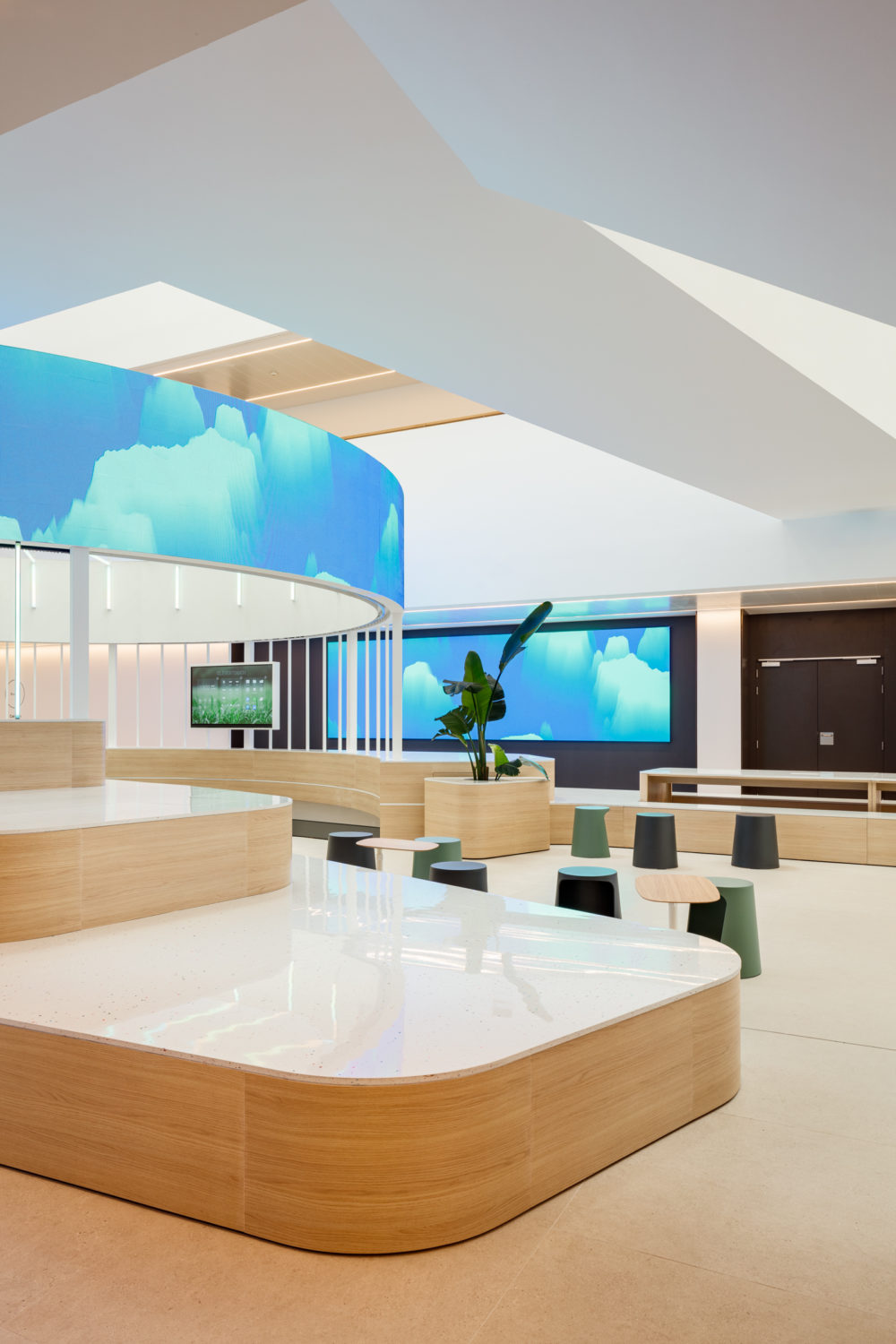 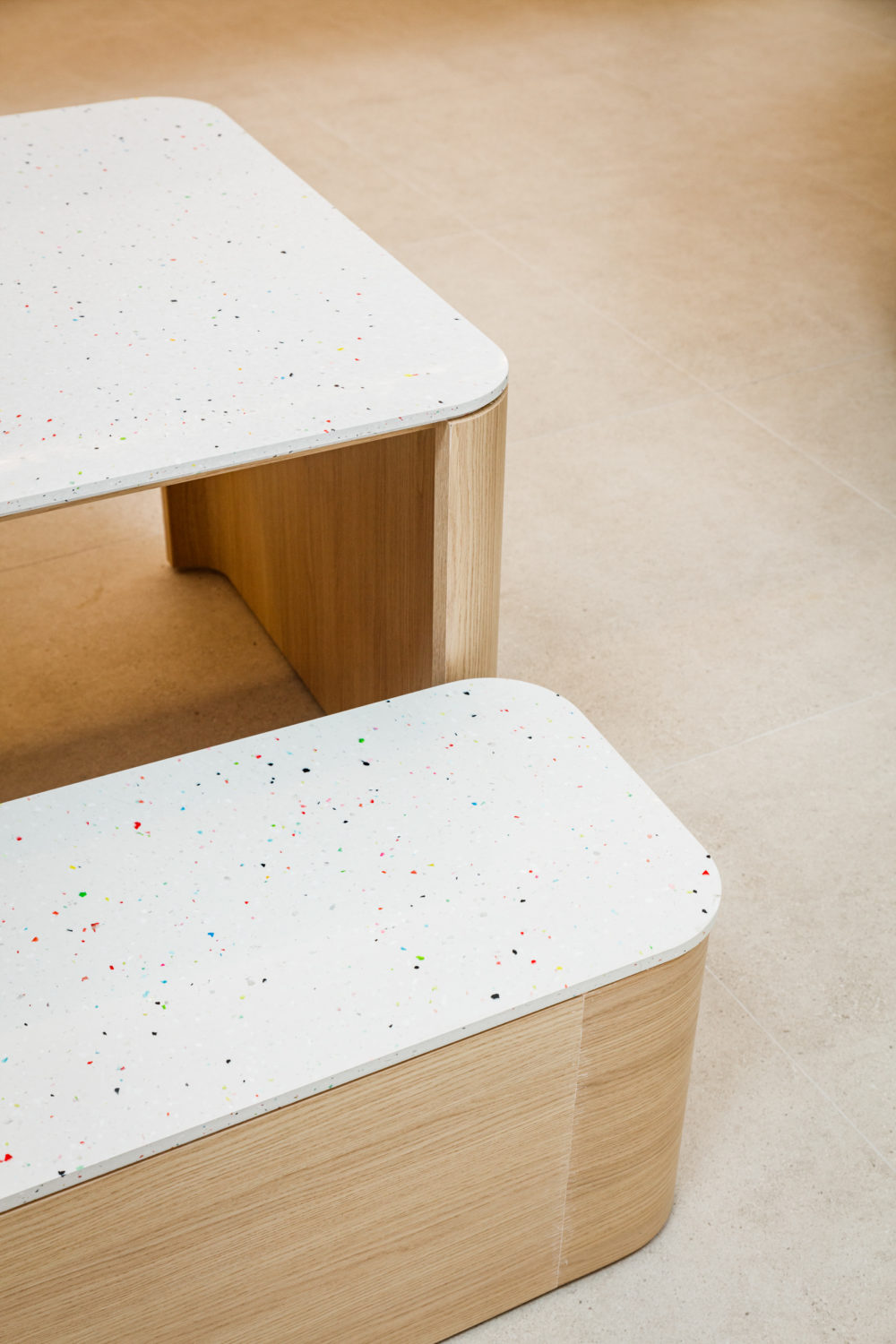 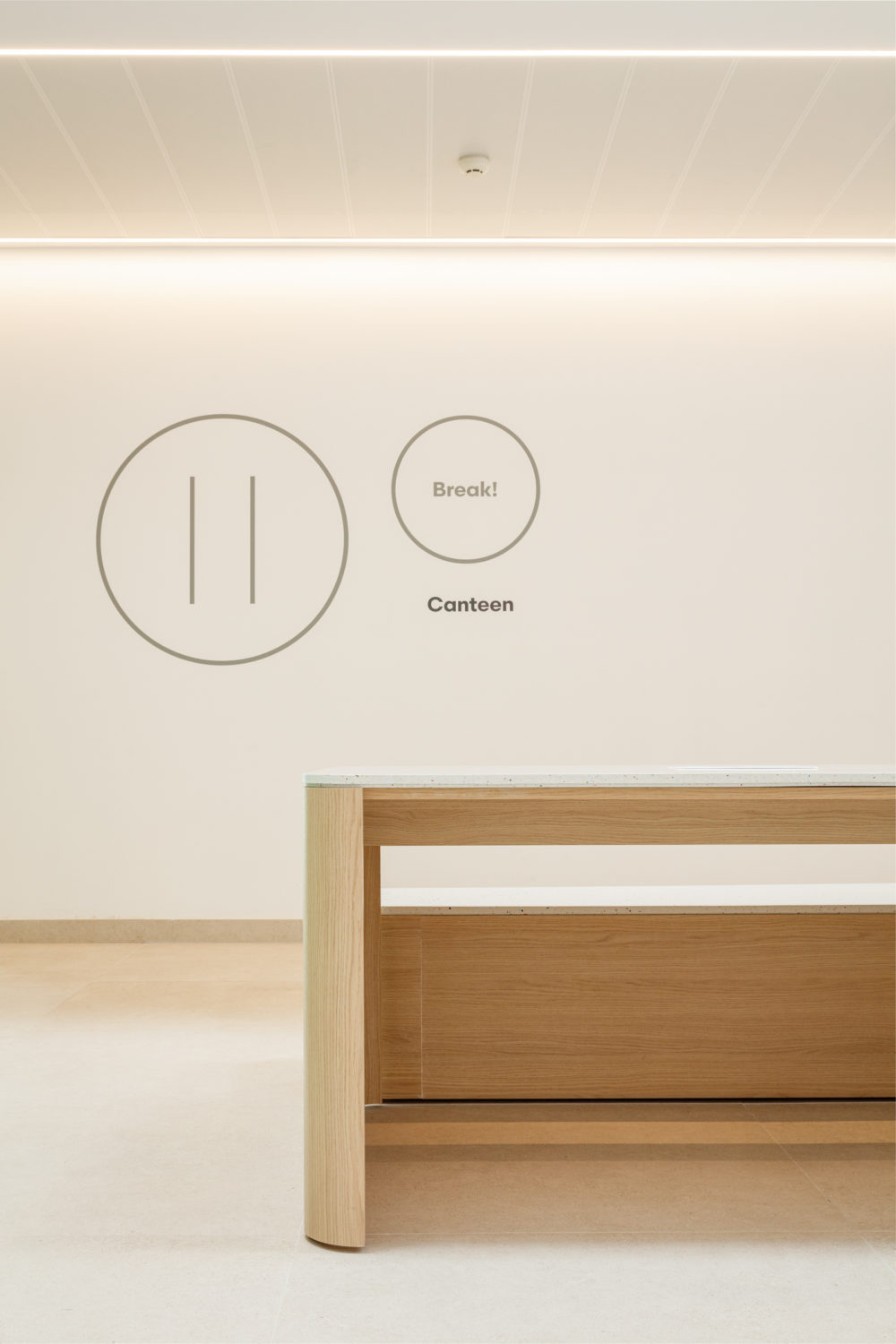 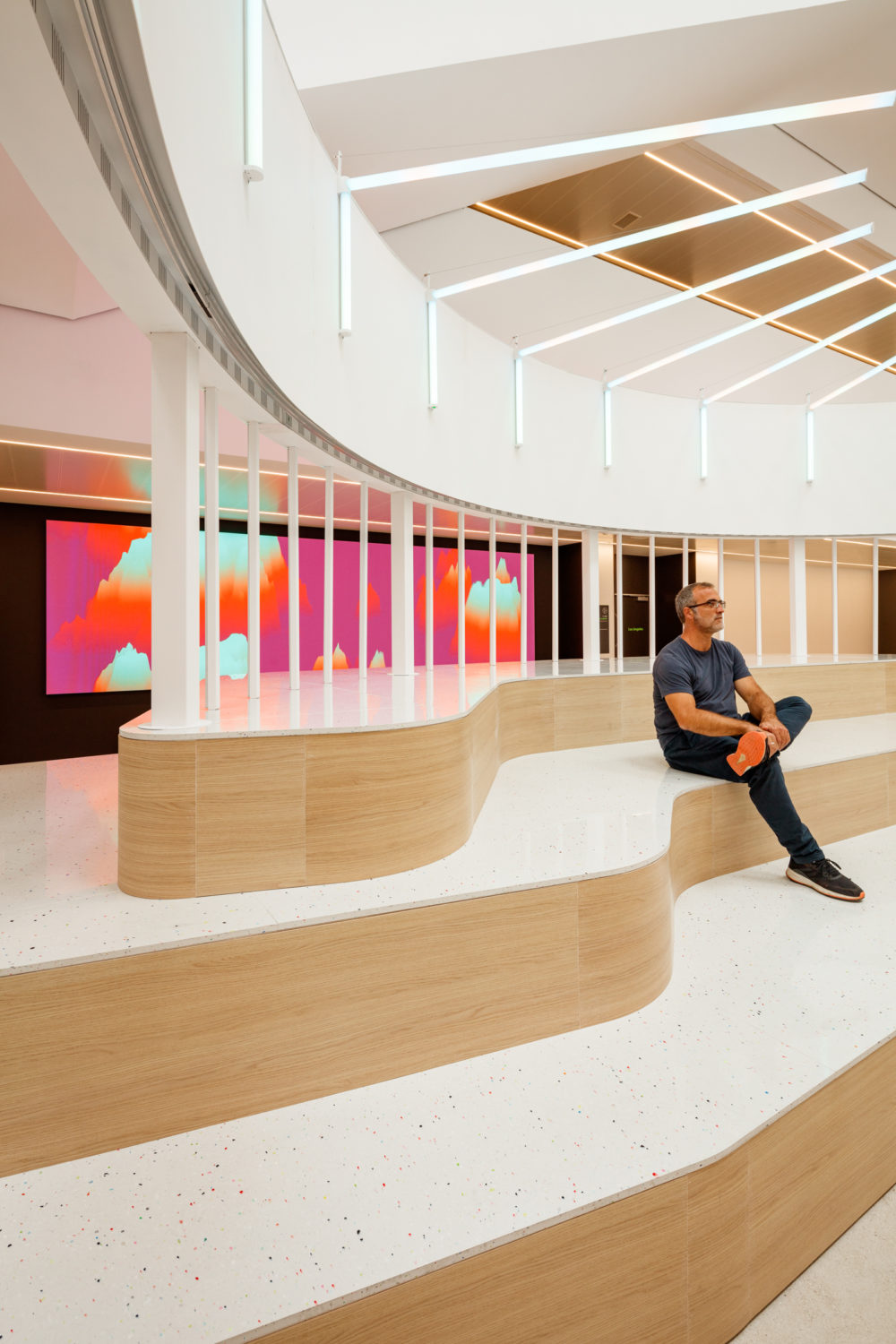 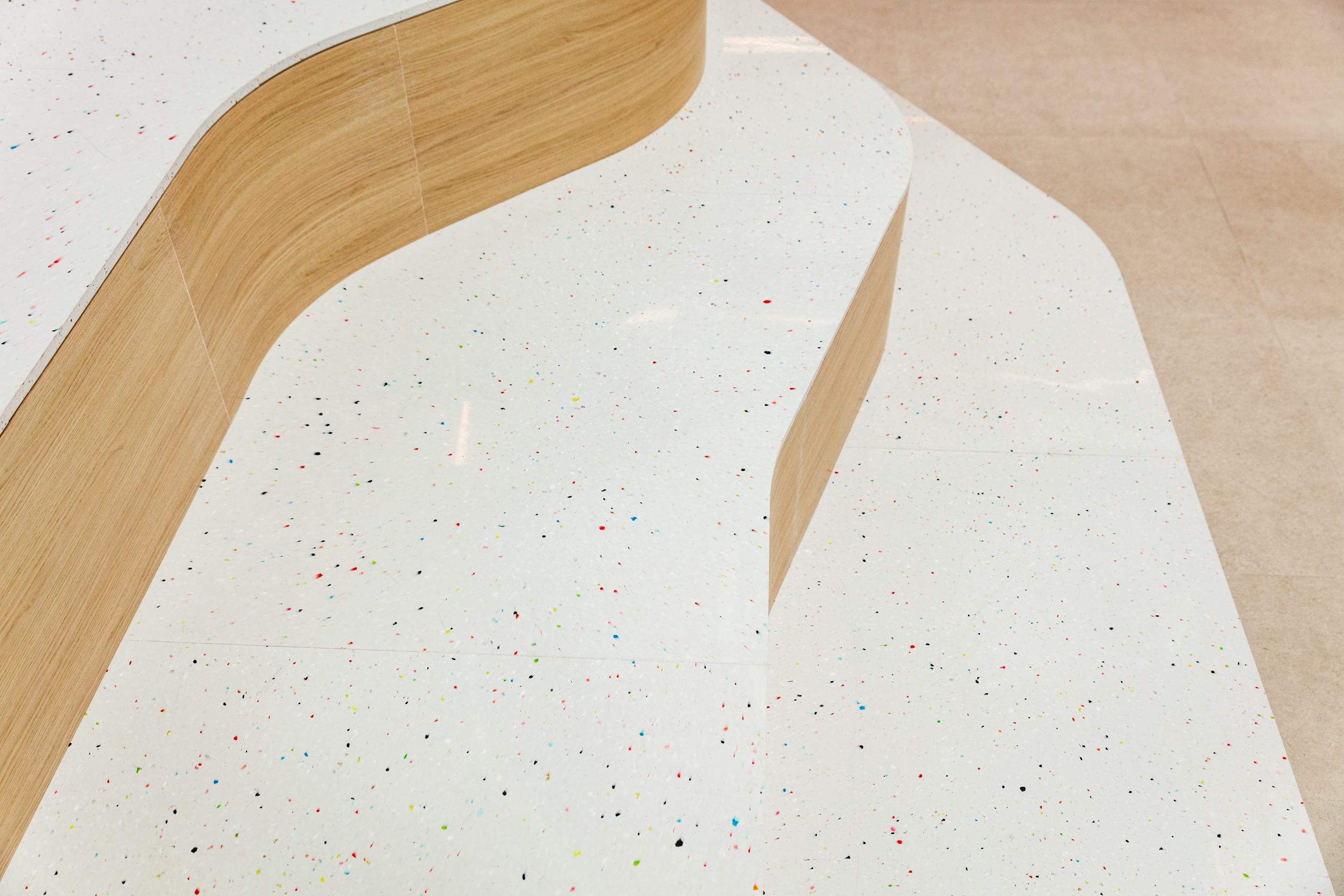 The objective has been to create a healthy environment for the user that favors productivity and interconnection, on a day-to-day basis, between students and professionals to maximize their creativity and talent.

All horizontal surfaces of coworking steps, benches and tables are made from 100% recycled and 100% recyclable plastic surface material called Polygood, manufactured by The Good Plastic and supplied by Revolución Limo. In particular, 41 2800×1400 and 20 mm thick panels were used, having utilizied almost 4 tons of recycled plastic that could have ended up in landfills. White Lollipop panels are made up of disposable plastic cutlery, which are the colored dots and inside lining of refrigerators or freezing equipment which make up for the white base of the panel.

To build the internal structure of the steps, the tables and the co-working benches 72 MDF boards 2850×210 and 19mm with cradle to cradle certification from Finsa were used.

Basically, this design project has sought to reflect the essence of the audiovisual industry and generate healthy spaces for users and areas for collaborative and individual learning. On the one hand, it has managed to maintain the formal aspect that was developed from the beginning by providing new sustainable materials to enhance the atrium as a space for meeting, experimentation, creation, dissemination of knowledge and celebration.

On the other hand, deardesign studio has also worked on the creation of a digital tool that facilitates interaction between students from different disciplines to develop different projects. It is an app that connects the needs between students in an agile way and contributes to solving projects with the minimum possible time. 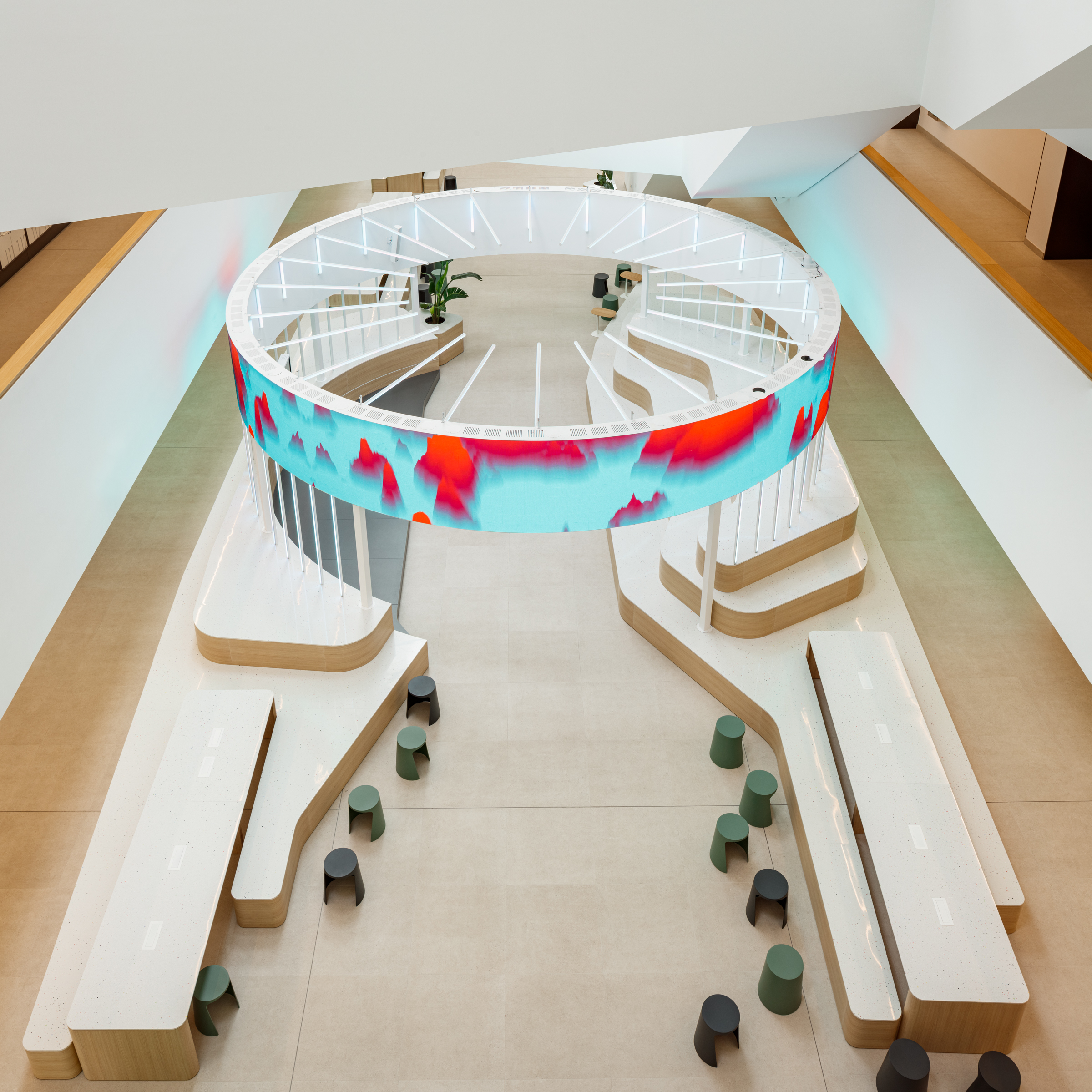